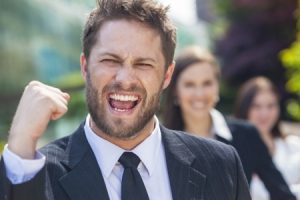 For many years now we have been hearing about the important role that testosterone plays in men's health, but now some researchers are looking into the socioeconomic effects of one's testosterone levels. This is particularly interesting because it opens up the possibility that one could potentially improve their chances for getting and keeping a higher paying job by manipulating their test levels.

It is pretty much common knowledge that low testosterone levels can lead to increased body fat storage and a loss of muscle mass in men, and while these things may not directly lead to failure or underachievement in one's career success they very well may contribute to. After all, even the most well-meaning employers do make hiring and firing decisions based on subconscious and preferences for a fit staff.

However an even more direct correlation may exist due to the fact that low testosterone levels can apparently lead to apathy, lack of energy, and a poor mood. These thing certainly aren't helpful for finding and keeping a good job!

A recent study from Harvard University looked at how testosterone, as well as the so-called "stress-hormone" cortisol affect the career and business success of men. The study found some rather interesting results. Cortisol which can apparently reduce your testosterone levels is often caused by stress. You may have heard the term "cortisol spike" - this is when one feels a surge of cortisol as their body responds to a stressful trigger. Cortisol has numerous negative effects on the mind and body, which is one reason its generally recommended to avoid cortisol "spikes" as much as possible

According to the Harvard University study, researchers discovered that, men who had high test levels long with low cortisol levels did the best career-wise. The markers used to determine this success where the fact that the men in this group had the most employees working under them. In the case of business owners these men owned the most profitable businesses

Another study, published in the European Journal of Personality examined the connection between testosterone and persistence in men, finding a direct correlation!

Because persistence is by all accounts an important predictor of future successes this makes a great deal of sense.

This being said, what are next steps?

Well, if you are a man over 30 then it couldn't hurt to see your doctor and get your levels checked. If you are younger but you think you may be suffering from low-testosterone, then it is always worth bringing up these concerns to your doctor too. He or she will likely give you recommendations based on their findings.

It should also be noted that a great deal of evidence points to simple lifestyle and nutrition changes you can make to boost your testosterone. This is also something you can discuss with your doctor if you are interested in taking an all natural approach to your hormone health.

Medical Disclaimer: The information provided on this website is provided for informational purposes only and is not medical or professional advice of any kind. Please read the full health disclaimers provided by any of the sites that we link to for detailed health information.